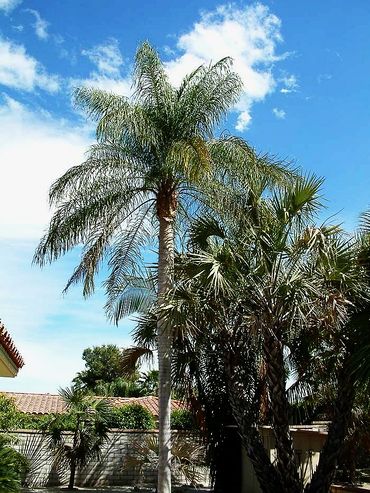 Photo: plantmaster.com
of Argentina. In some areas is found alongside Butias.

Monoecious palm tree with a 10-15 m high and 40-50 cm in diameter, occasionally with a slight bulge at the base or in the middle to the solitaire trunk and, often, armed with up to 12 cm long cylindrical spines, specially when young, along incomplete circles, spaced 10-12 cm throughout the trunk.Pinnate 2.5-3 m long leaves, with grayish green segments and abaxially whitish, several-ranked leaflets along a spiny 40-80 cm long petiole. The leave rachis, also spiny on both sides, has more than 100, 40-70 cm long and 1-2 cm wide, reduplicate, several-ranked and bifid tip leaflets. Leaves bases are entire, spiny and have indument. Acrocomia totai has a 1.2 m long inflorescence that grows between the leaves and partially hidden by them, with a tomentose and spiny peduncle an covered by a tomentose red spathe with a very sharp tip; monoecious diclinous flowers in same inflorescence. Inflorescence bearing female flowers in triads at the base, while the rest bears male yellowish flowers. Globose, 2.5-5 cm in diameter fruits with yellowish green smooth epicarp that turns almond brown when ripe. The mesocarp is fleshy, yellowish and abundant, very rich in oils. Endocarp is dark brown to black, hard and 3-4 mm thick and bears three pores off the equator. The seed has a 1.5-2 cm diameter and germinates in about 18 months. Cromosomes: n=15 (Jose A. Grassia)

It prefers deep and sandy, not subject to flooding ground, with not so deep underground sheets of water. It tolerates modified, clayish ground well and it is often found in spiny forests sharing its habitat with various species of trees. It normally grows on open plains or on deforested land , frequently found on disturbed land, in areas with well defined rainy seasons, normally on low lands. (Jose A. Grassia)

The seeds take about a year to germinate and the plants are fast growers if given enough water. Is the most cold resistant of all Acrocomias, tolerating frost without damage.

This is a tillering palm, it exhibits saxophone style root growth (it has a heel), keep top third of heel above soil elevation!.

Phenology: A. totai blooms from the beginning of spring until mid-summer and its fruits mature by the end of winter, although they remain attached to the tree for some time after. Pollinators and dispersers: Besides the wind’s action, the main pollinators are Curculionidae, Nitidulidae, Escarabaeidae and bees, mostly honey bees. (Jose A. Grassia)

Uses: As many other palm tree species, every part of Acrocomia totai was and is still used throughout America. Although it is nowadays mainly used for cosmetics, soaps and bio-diesel, in native cultures it was a source of food, beverages, clothing, fibers, threads, cattle food, oils and margarine, needles, firewood and charcoal. Palmetto hearts come from its shoots, hypertension and diuretic medicines from its roots; its seeds are used as beads for necklaces and bracelets; its fruits are eaten fresh or as preserves and its endosperm is also ground and brewed with milk. (Jose A. Grassia)

This large palm from Brazil, Bolivia, and Argentina is covered with spines and is best described as "interesting," although a well-grown tree certainly has a very handsome appearance, especially from a distance. The difficulties in germinating it are as formidable as its armament, as the seeds take up to a year or more to sprout (a heat treatment prior to sowing has been fairly successful at improving results). When the plant eventually does grow, it goes WHOOOOMPH!!! but is covered from head to foot with dangerous, dense, black spines. Those who like a challenge will certainly enjoy growing this palm! It is quite frost resistant and suitable for warm temperate to tropical climates. ( RPS.com)