From Palmpedia - Palm Grower's Guide
(Redirected from A. tuckeri)
Jump to: navigation, search

Archontophoenix tuckeri is native to Northern Australia, where it is mostly 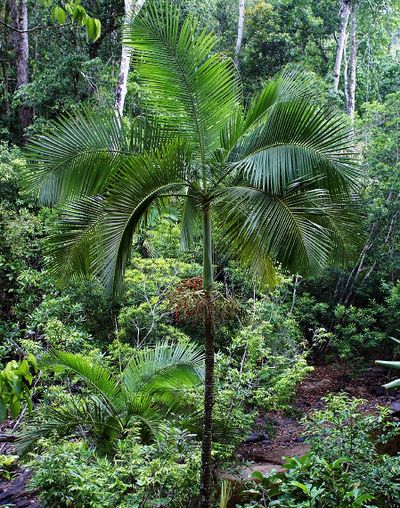 found in moist tropical areas, particularly in rainforest or along streams. A. tuckeri have found their way into cultivation all over the world. Occurs in rainforest, gallery forest, swampforest, mangrove ecotone and moist vine-thickets of Cape York Peninsula, Queensland from Mcllwraith Range [14° 00'S] to Cape York [10° 40'S], from sea-level to 500 m altitude.

A. tuckeri is a large, single-trunked palm reaching 22 meters in height. The small fruits are inedible. Blossoms are white, and borne at the base of the lime-green crownshaft. The crownshaft in mature specimens is 3 - 5 feet ( 1 - 1.66 m) long. Propagation is by seed. Given a happy home, with warmth and plenty of water, A. tuckeri grows very fast -- a near-death 12" (30 cm) tall specimen in La Habra, California, grew to about 15 feet (5 m) tall in about 5 years. Editing by edric.

Native to tropical areas, A. tuckeri will not take heavy frost, but, on the other hand, given their vigor, will often outgrow inclement conditions that do not kill them. This is a variable species which tends to become shorter with smaller leaves in the northern parts of its range. The fruit is large and the two distinct layers of fibres in the mesocarp are unique within the genus. New leaves are often in tones of pink, red or bronze, and the juvenile leaves become proportionately larger than in other species before they commence to divide.