From Palmpedia - Palm Grower's Guide
(Redirected from A. obtusifolia)
Jump to: navigation, search 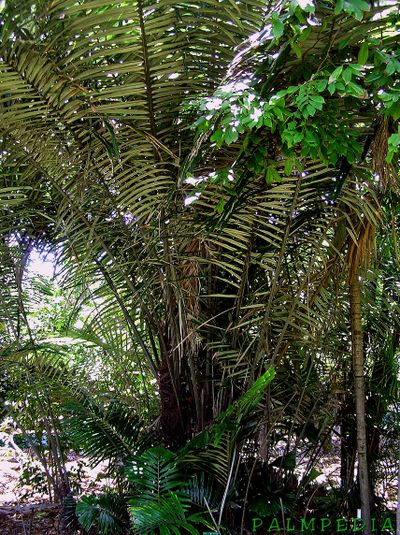 Arenga obtusifolia is an evergreen, cluster-forming palm that can grow up to 20 metres tall. The unbranched stems can be 15 - 30cm in diameter, crowned with a rosette of around 8 large leaves. The plant produces new stems from a stoloniferous growth that can be up to 15 metres long. The plant is harvested from the wild for local use as a food and source of materials. All species in this genus have either recognized or potential ornamental value.

Grows best in a sunny position. Unlike the majority of species in this genus, Arenga obtusifolia does not die after flowering. Flowering stems arise from every node on the stem, commencing at the lowest node and continuing upwards as the plant continues to grow.

The sugar palm Arenga obtusifolia commonly known as 'langkap' in Indonesia, covers an estimated 18, 000 hectares of the Ujung Kulon peninsula (part of the World Heritage Site, Ulung Kulon National Park, Java), home to the 'Critically Endangered (CR)' Javan Rhinoceros (Rhinoceros sondiacus). The spread and dominance of A. obtusifolia has negative impacts on undergrowth that comprises the food of the Javan Rhino; including seedling regeneration because of shading and poor light conditions caused by the canopy of the palm. Since 2003, studies have been underway to find an effective way of controlling this invasive species. Direct injections with Round-Up (Atrazine) herbicide, have proven to effectively kill the palm without leaving harmful chemical traces in the soil.

The fruits of most species in this genus are poisonous and are sometimes used criminally. The fleshy mesocarp of the fruits usually contains many oxalate crystals, making the flesh inedible.

Leaves - cooked. The apical bud, known as a 'palm heart' is eaten as a vegetable. Harvesting this bud leads to the death of the stem since the plant is unable to make side shoot.

The taller Arenga palms store large quantities of starch in their stem that are later converted into sugar to be translocated to the inflorescences. The sugar can be drawn off in the juice by tapping the peduncle and rachis of the male inflorescence. By far the most important sugar producer in the genus is Arenga pinnata, but other species are used similarly, the leaves are used for thatching and wickerwork.