From Palmpedia - Palm Grower's Guide
(Redirected from A. aculeata)
Jump to: navigation, search

Acrocomia aculeata is an extremely widespread palm from tropical America. 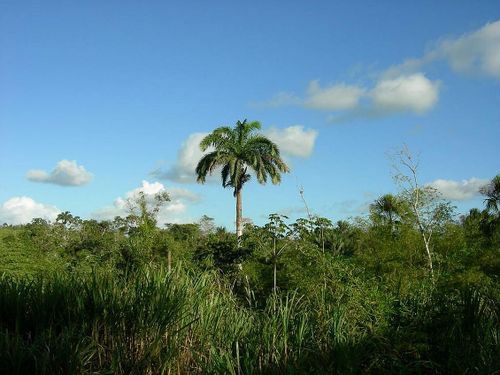 Large specimen, Trinidad, West Indies.
Its range begins in eastern Brazil, and extends north through Venezuela, Colombia, and Central America. Cuba and the other Carribean Islands also provide habitat for this variable species. It has been speculated that such a broad range was assisted by the migrations and cultures of the prehistoric peoples of this region.

These impressive palms bear a superficial resemblance to the majestic Royal palm from a distance, due to its size and attractive form. However on closer inspection, the copious spines on most forms, along with the plumose character of the leaves, give its true identity away even to the relatively uninformed. Editing by edric.

This palm can be very fast growing and surprisingly cold hardy. However, because this species is so variable, its growth characteristics can be variable as well. It is most common in open sunny areas, and is fairly drought tolerant. However, it makes a much more attractive specimen with adequate water. It is tolerant of many soils and conditions, but will not handle shady locations. One must be careful when planting such a vicious palm. As a juvenile, with its sharp and plentiful spines, it can present a hazard to children and pets, not to mention, the well caring gardener.

In climates like Florida (including the central part) these are very fast-growing palms. According to informants in Orlando, Acrocomia can reach 30 feet (10 m) tall in about 5 - 10 years. They are much slower-growing in Mediterranean climates like Southern California, but will thrive with plenty of water. In any climate, avoid placing where they might get bumped into by sensitive people.

At one time, due to the previously mentioned variabilty, there were 2 dozen described species. Today, according to who you recognize, there are as few as two. The uses of all parts of this palm would take several paragraphs to list, and would provide interesting reading.

Field Guide to the Palms of the Americas by Andrew Henderson, Gloria Galeano, Rodrigo Bernal. Page 166.

All information tranlated from the French, and Spanish, edric.